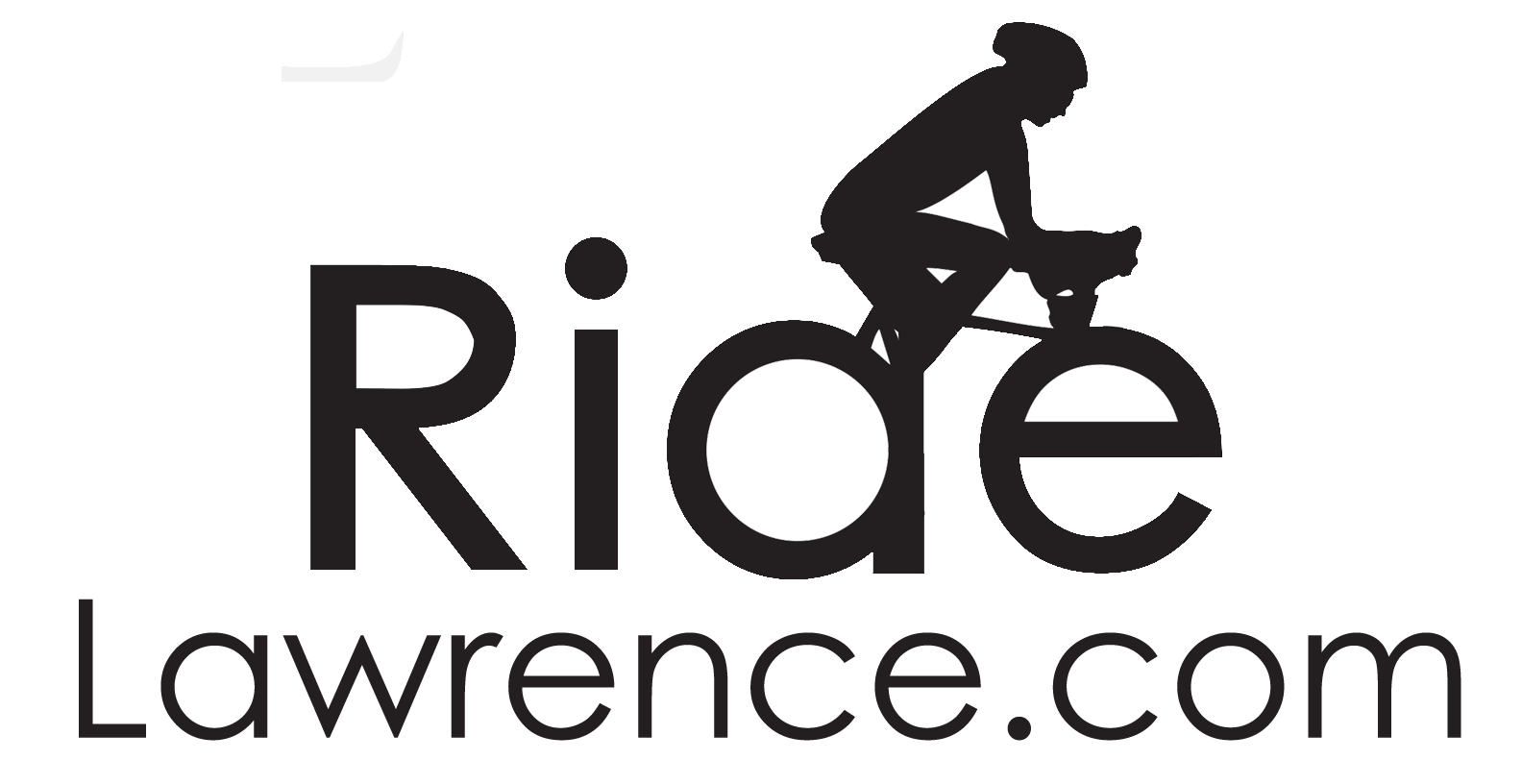 Repost: Biking and the Fallacy of Zero-sum Environmental Thinking 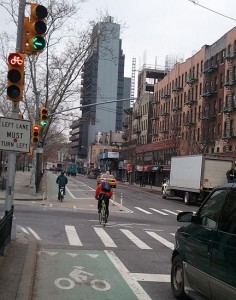 Here’s a repost from the EcoOptimism site written by David Bergman about the misconception that in order for one person to gain something others need to loose in terms of bicycle lanes.

The great James T. Kirk once said (or is it ‘will say’ since it takes place about 270 years from now?) “I don’t believe in the no-win scenario.” My much less quotable version of this might be “I don’t believe in the zero-sum scenario” — at least not in the case of environmentalism, where I like to point out the many win-win and win-win-win scenarios.

A zero-sum game is “a situation in which a gain by one person or side must be matched by a loss by another person or side.” Because of misperceptions of competing interests, environmental issues are often seen as resulting in, at best, zero-sum results. Gains for the environment, for example, are seen as necessarily won at the expense of jobs or energy prices. Developed countries are pitted against developing countries. You get the idea.

On a smaller — and therefore perhaps more personal — scale, bicycling as an alternative form of transportation often ends up in verbal skirmishes with drivers (played out in the news and, sometimes, the courts), who see bike lanes as stealing space from vehicle lanes, and business owners, who fear shoppers won’t come if they can’t park in front.

There are, of course, some valid complaints about cycling. Here in NYC, there is a sort of Wild West legacy of riding in which cyclists until recently had no safe turf. Hence a fend-for-yourself attitude developed whereby many, especially delivery bikers, would ride wherever and however they could to get where they needed to be. Since drivers gave them no respect, the feeling became mutual. (I don’t, by the way, have any such rationale for cyclists who scare or endanger pedestrians.) 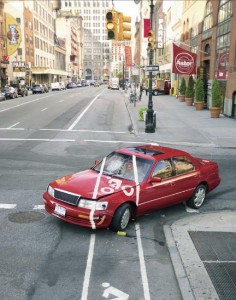 A NYC safety campaign poster. (The real bike lane is on the left side of this street.)

With the recent expansion of bike lanes here and elsewhere and an accompanying growth in cycling, both bicyclists and drivers are in a transitional learning period. Cyclists – especially the “old timers” – need to adjust to the fact that they are now a legitimate part of cities’ transportation networks and, as such, need to be responsible. (I’ve been cycling in NYC for over 30 years both for utility and recreation, and have more recently become more, um, law-abiding, in part to be a cycling “ambassador” and offset some of the ill-will generated by more selfish riders.) Drivers, for their part, should realize that every bicycle represents one less car and, therefore, that much less traffic congestion and that many more available parking spaces. Win-win, like I said.

Actually, it’s better than that, with at least three wins we can tally. But let’s back up slightly to a story that made headlines last week. Washington state Representative Ed Orcutt believes bicyclists get a literal free ride in that they don’t pay gas taxes while using roads. (The bigger headliner was that he also said that cyclists pollute because they exhale more carbon dioxide while pedaling. He later partially retracted that Onion-ready statement.) Never mind that gas taxes often don’t cover a lot of the costs of road construction and maintenance, or that the idea of person plus a 30-pound bicycle, utilizing a space maybe 2 feet wide by 4 feet long, contributes any sizeable wear to roads compared to a 4000-pound, 16’ long by 6’ wide car is ludicrous.

Orcutt isn’t alone in proposing bicycle taxes. Special fees have been proposed in adjacent Oregon (and I thought the Pacific Northwest was the bastion of treehuggers!), are in place in Hawaii, and sales taxes are actually being levied in Colorado Springs. I’ve written about perverse subsidies (here and here); these are perverse taxes in that they discourage an activity that is beneficial to society.

Let’s enumerate some of those beneficial aspects of cycling. 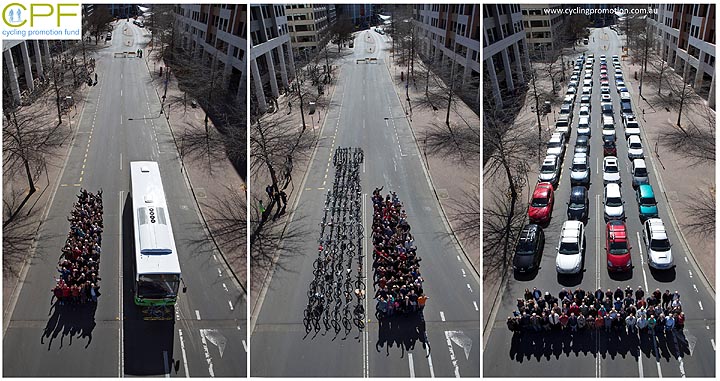 Amount of space required to transport 60 people by bus, by bike and by car. “The image succinctly illustrates the greater space efficiency of bus and bicycle travel,” spokesperson for the Cycling Promotion Fund (CPF), Mr Stephen Hodge said. “In the space it takes to accommodate 60 cars, cities can accommodate around sixteen buses or more than 600 bikes.

So we have a many-times win if we are looking at the supposed tradeoff between cycling and driving. How about the interests of businesses?  Here in NYC and, I’m guessing, elsewhere, proposals for bike lanes that reduce the number of parking spaces or make curbside access more difficult inevitably elicit objections from storeowners who fear that customers will choose other stores where they can get from their cars to the store more readily. The fallacy in their thinking is that, in urban shopping districts, most customers are local and are therefore on either foot or bicycle. So a bike lane serves to entice more customers, not fewer. This has been documented:

….businesses on Eighth and Ninth Avenues in New York saw a 50 percent increase in sales receipts after protected bike lanes were installed on the corridor. On San Francisco’s Valencia Street, two-thirds of the merchants said bike lanes had been good for business….[and there’s] a Memphis neighborhood where people, without authorization, spent $500 on paint and made their own bike lanes. Six months later, commercial rents on the strip had doubled, and all the storefronts – half of which had been vacant – were full.

That initial concerned reaction from storeowners is understandable in the context of our car-centric culture. And like the common but incorrect assumption that adding lanes to highways reduces congestion, it intuitively makes sense. You know all that advice about intuition and trusting your gut? It’s not always right. Data tends to be more conclusive.

Are there losers when space or funding is taken from cars for bicycles? Certainly. But all pointers seem to indicate that there are far more winners, including among drivers and storeowners. Since I started here with a quote from Star Trek, it seems fitting (if geeky) to conclude with one, this time from Mr. Spock:  “logic clearly dictates that the needs of the many outweigh the needs of the few.” The few here are a smaller subset of the small number who drive in cities, a fraction relative to the numbers of pedestrians and cyclists and the good of the public in general.

The basis of EcoOptimism is the win-win symbiotic ecological and economic solution. Environmental initiatives, when implemented well, result in more jobs, a stronger economy, a healthier population and, for our added convenience, a world we can still live in.